An ancient Chinese tradition that brings good luck, prosperity, and happiness to your event. Whether your event is a party, birthday, wedding, grand opening, Chinese New Year event, or convention, we can provide you with the appropriate lion dancing ceremonies.

Prices start at $500 for the basic event. Additional charges would apply for out of town performances, martial arts demonstrations, lectures, or seminars. Please call to confirm pricing.

The San Francisco Wushu and Lion Dance Team regularly performs the traditional lion dance all year round for various conventions, festive grand opening celebrations, and dance shows. In 1987 alone, the Team performed for the 50th Anniversary celebration of the Golden Gate Bridge, the Honorable Mayor Feinstein, the Ethnic Dance Festival, and many other noteworthy people and occasions. In September of 1987, two of our members were part of a multi-cultural program welcoming the Pope to San Francisco.

Chinese lion dancing is a traditional art that originated many centuries ago. Stories about the origins of lion dancing abound in Chinese folklore. During modern times the meaning behind lion dancing is singular and consistent — the performance of a lion dance always celebrates happy, festive, and auspicious occasions. One commonly 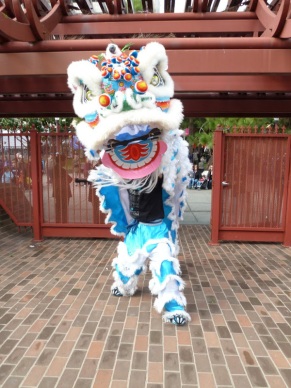 witnesses lion dances at grand openings, special gatherings, birthdays, festivals, weddings, parades, anniversaries, dance and martial art shows, and other joyful events. The lion dance is ubiquitous in Chinatowns all over the world during Chinese New Year and the beginning of the Spring Festival. These creatures and their thundering musical accompaniment are believed to dispel evil spirits and ensure prosperity, abundance, and good fortune.

The Chinese lion is a mythological beast. Lions aren’t native beasts of China, therefore the Chinese lions are actually manifestations of the rich imaginations of skilled Chinese craftsmen. The lion, unlike the tiger (which is native to China), is regarded as a peaceful and benevolent animal by the Chinese. The unique features of the lion all have their own symbolic meanings. For example, the colors of the lions may represent certain historical heroes or cultural concepts; the colors even dictate the distinct manner in which the lions are supposed to be danced. 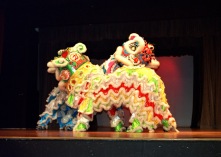 Southern style lion dancing has always been closely associated with martial arts training. The strong stances, powerful arm movements, and endurance required to dance the lion all need martial arts training as a prerequisite. Historically, the quality of Chinese martial art schools was judged by the level of their lion dancing. Therefore, only the best students were allowed to represent the school in lion dances. People often tested the ability of the lion dancers by displaying different puzzles that the lion had to solve correctly. This would not only make the dances more entertaining and demanding, but it would also clearly differentiate the good martial artists from the bad. As a result of the intense competition, lion dances often ended up in fights between rival schools to determine which school was superior. For this reason, the lions were usually escorted by students armed with bizarre-looking ancient Chinese weapons. Thus, the reason why lion dances and martial arts performances of today are so often combined is because the demonstration of martial arts complements and brings out the full flavor of lion dances.